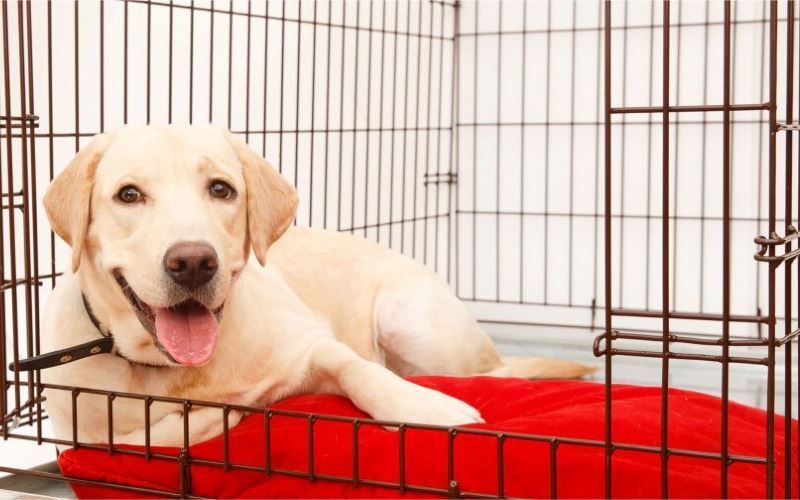 The thought of confining a dog to crate can seem harsh and unnecessary to some owners. However, when this is viewed as providing the dog with a safe, comfortable den that he chooses to lie in, the perception changes. Introduced correctly, a crate can be one of the most useful pieces of equipment you purchase.

Crates can be used at home when you go out or have non-doggy children visiting. They can be used in the car for safety and security and they can taken with you on holiday so no matter where you are, the dog has his regular sleeping area right there too - literally providing a home from home. With care, they can be used to help with house-training and home alone training. And, should the worst happen and your dog has to stay overnight at the vet’s or is put on restricted exercise, e.g. due to a broken leg, your crate trained dog will not have to go through the additional trauma of unfamiliar close confinement as he will already view crates as great place to be.

Now that some of the virtues of crate training have been extolled, I must warn of the danger of abusing this useful tool. Crates should be used for SHORT TERM confinement only. Leaving your dog home alone in a crate for 8 hours every day is unacceptable. However, leaving him there for 2 hours would be fine. The crate must be large enough to allow the dog to stand up, turn around and lie down comfortably. There should also be space for a bowl of water. If you buy a crate for your puppy, plan ahead. Don’t buy one that fits just right now, buy one that will fit the dog for his whole life.

So you’ve got your crate - what next? How do you get your dog in there? What you don’t do is shove him in and quickly shut the door to stop him coming back out! Comfy bedding is a must. It should be thick enough to provide warmth, and allow for the dog to paw at it to make it more nest-like. The next step is to tie the door open. If it is not tied open it may accidentally close at the wrong time and so set your crate training back a few steps.

Finally, make sure you have some tasty titbits on hand which you can use to encourage your pup into the crate and reward him whenever he’s there. Clicker training works particularly well for this exercise. Start by calling the pup and throwing a titbit just inside the crate. As he moves in to eat it, gently praise him ‘clever puppy.’ Repeat this several times, each time throwing a titbit further into the crate until the pup has to go all the way inside to eat it. You can then start to say ‘in your bed’ just before the dog goes into the crate. The routine should go like this:

Once your dog is happy with this, you can start to delay throwing the food in until the dog has already walked into the crate. And so the routine would change to:

In order to help the dog get used to the crate, allow him to wander in and out whenever he likes. If you see him in the crate, you can praise him and drop a food treat in for him. If you have made the crate inviting enough you will probably find that your dog will start to choose it as a sleeping area.

The next step is to feed the dog in the crate. Prepare his food, put it in the crate and then, as before, say "in your bed". This time instead of just a titbit the dog finds his whole dinner in there - what a great place to be! At first, leave the door open. Closing the door too soon can make the dog nervous or suspicious, and so he may become more reluctant to go into the crate. However, once he happily trots in for his feeds, you can start closing the door while he is eating and opening it just as he finishes.

When you are crate training, try and be very low key when the puppy comes out of the crate. Save all your praise and excitement for when he is inside. Your dog will soon learn that he gets lot of attention, affection and goodies inside the crate, but very little outside. Practise this little and often. If all his feeds are given in the crate you will automatically have at least three or four practice sessions per day with a puppy, or two with an adult dog. Now accustom the dog to short confinement. Stuff some of his dinner into a Kong toy. Sit this in his bowl with the remainder of his dinner and place it in the crate. When your dog goes in as usual, close the door and leave him there while he eats his dinner and empties his Kong. (Emptying a stuffed Kong should already be familiar to him before you do this.) You also leave him in there for short periods by giving him a chew or stuffed bone. By gradually building up the time he spends in his crate, it shouldn’t take long for him to learn that his doggy den is THE place to be. From start to finish it should take about a week to crate train your dog. However, don’t try and rush things, go at his pace.