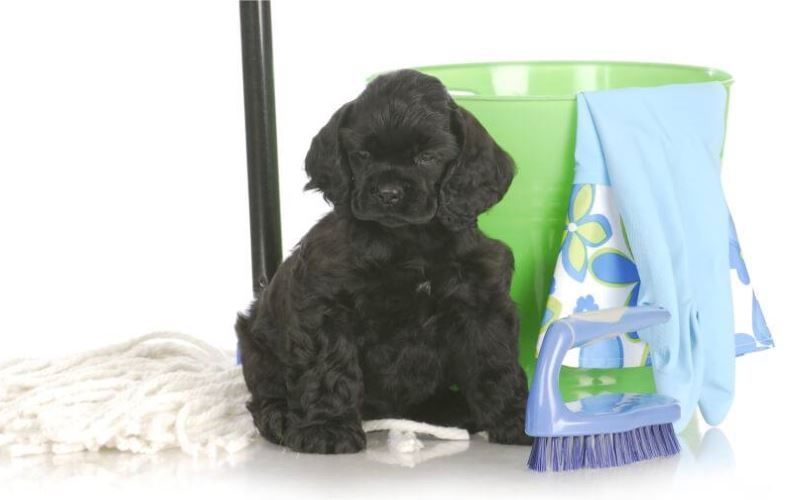 Housetraining is all about the 3R's: Routine, Relief and Reward. This can be a tricky time for both owners and pets, but with a little understanding it needn't cause problems. The first point is that peeing and poo'ing is normal, natural and necessary. Never punish your dog for answering the call of nature - he can't help himself. His body tells him to pee or poo, so he does. Rubbing his nose in his own excrement is only going to teach him that you are nasty and that he should hide himself away behind the sofa next time he poos. It is simply up to you to teach him the appropriate place to do it.

There are certain times when your dog is likely to relieve himself:

Routinely take your dog out into the garden after each of these activities and wait with him until he goes to the toilet. As he does, introduce a word or two which mean 'Go to the toilet' - e.g. 'Hurry up.' The instant he finishes, give him a tasty titbit. If he is too distracted sniffing the plants and chasing birds, put him on a lead when you take him out. Then you can let him off lead to play as his reward for relieving himself. Stay with your pup when he goes out to the toilet. This is the only way to ensure that your puppy has actually gone, and to reward him at the right time.

At other times, watch for signs that he may need the toilet, such as sniffing at the door, circling or staring at you. If he does get caught short in the house, on no account should you scold him or rub his nose in it. That will simply result in your dog becoming inhibited about “performing” in front of you—we often hear from frustrated owners who say they walked their dog for an hour, it held on, then they came home and hey presto! as soon as their backs are turned! Simply clean up and be more vigilant next time. If you are having difficulty spotting the signs, just give your dog the opportunity to go out at regular periods, e.g. every hour or so.

A dog cage may be used extremely effectively as a housetraining tool. The purpose of short-term (under an hour) close confinement, i.e. a cage, is to inhibit the dog from toileting at all indoors. Dogs are clean animals and are unlikely to mess in their own beds unless they have to, e.g. they are confined to a cage for too long or when they are ill. When used as a tool to help owners predict when the dog will need to go out, the age is ideal. The dog should be taken outside immediately when released from confinement as it is almost guaranteed that he will need to go to the toilet. As the dog learns this short period can be extended.

Night-time is when many people put newspaper down for their new dog or puppy. But just think about the confusion this can cause. You are trying to teach pup that he must not relieve himself indoors. But then you confuse him by allowing him to do just that throughout the night! This confusion can really slow learning down. Instead of laying newspaper on the floor, get up and let the pup out through the night. You need only to do this a couple of times for the first few nights. For example, for the first few nights you could bed him down at 11.00pm, then get up and let him out at 2.00am, 4.00am and then get up at 7.00am. After that you will have gained a feel for the best time to take him out and can then probably reduce the trips to just one. This may seem more inconvenient, but it helps the pup learn much faster and saves coming down to urine and faeces covered newspapers every morning.

A cage can also be used during the night. However, you must be vigilant and not forget to get up and take the puppy out. If you force the puppy to mess in his own bed, you can discount the usage of the cage in the future. In fact, what you may inadvertently teach is that putting the dog in a cage is like saying ‘Go to the toilet now’ - not a very desirable prospect.

When you need to leave the puppy home alone, put him in an area that is easy to clean, for example the kitchen or utility room. The purpose of this long term confinement, e.g. over an hour, to a restricted area is to confine the problem at times when the owner cannot supervise the dog. Acknowledging that the puppy will have to eliminate during the course of the day, you should leave the pup in an area where it is acceptable for him to eliminate. Confining the dog to one room is sometimes a temporary necessity until the dog is housetrained, at which time he may be given more access to other areas.

Cleaning Tip:
After dis-infecting the area, use a mild solution of biological washing powder and warm water to clean up any accidents. This will remove any traces of ammonia, which is present in both urine and many cleaning products, and will help prevent specific areas becoming favourite toilet zones.